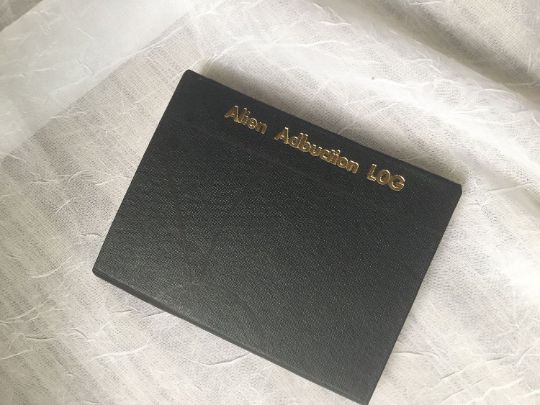 I think I have said it before , but it bears repeating. I get a cheap thrill off walking into work seeing co-workers all carrying my journals of various sorts that I have given them over time. Not just to see they have it displayed on their bookshelf or coffee table, but to see them being used, written in. So nothing was better than to walk into the big manufacturing plant where the big sausage is made last Thursday morning and see E, our plant production manager jotting notes into one of my Alien Abuction Logbooks ( circa 2018). These were a special run of small pocket book sized Smyth sewn notebooks with some crop circle like designs on a black non woven cover material. I sold several at shows and craft places, but mostly I gave them out to some friends. I must have given it to E 2 years ago, so it was a surprise to see it being used.

On another note, ain’t it funny how talking about UFOs and aliens can lose you friends real fast? Crazy, I know. In fact, that’s why I made those journals after a friend of mine on peak 8 in Breckenridge told me he saw something.

I said: “Ron, bro…. don’t go repeating this shit you just told me. Write it down. Document it. Save it for the right time and the right place.”

Naturally, he didn’t listen and quite soon the whole town painted poor Ron as Loony Tunes over his claims he saw UFOs on Peak 8 during broad daylight! Co-workers of Ron’s would not admit to such claims, but did say that there were construction helicopters in the valley that day and perhaps Ron was just confused.

Well I thought I would start this post out on a quirky note just to say: Yes the rumors of our demise have long been exaggerated. We are still here, still alive, and the future looks bright. I had not posted here since 2019, but hey….what the heck! I ( we) had some things more important than this space to be concerned with as I well hope you can understand. And wow, the game has changed.

2020 initially brought great promise for Design Bindery as my wife and I both recovered from some serious flu stuff all through January of 2020. The future looked bright for indie bookstores, and interest in our brands were increasing steadily, and then suddenly…. our whole world changed for the worse. For us it was a mixed bag.
The bad news:
The only wholesale orders from retailers that we did get were understandably very few, and other custom work was limited as trade shows and other social events ground to a halt. Barely (didn’t even) pay for my rent down on South Street. I went into a shell followed by a time /space continuum lock which lasted for an unknown amount of time.

The good news though is better:
Online orders of personal journals kept us alive and we have built a small but friendly and active network of Noterions. Custom Book production, personalized photobooks and personalized children’s book sectors however were 20 to 25% greater than any expectation as shutdowns worldwide forced people home and searching inward for the tangible and important things in their life. After catching the Covid very early in 2020, I recovered in about 10 days and went back to kickboxing 3-4 times per week after my gym re-opened in May.

I’m actually very grateful to live in Nebraska and to be in a line of work that was considered “essential”. While other states were clamping down excessively with lockdowns and restrictions, in Nebraska, I felt like the limitations were reasonable given the crisis at hand. There is no way I could have sat at home watching Netflix for months.

Seeing the need to leverage technology as a small independent bookbinding enterprise, I have some irons in the fire for 2021:
* an online editor for family history type book production of Smyth sewn special editions
* Continued rollout of new Noterious Notebooks | Stationery line
* Expanded product offerings in the Design Bindery standard products line

More on this soon. The bear is out of the den. Time to shine.