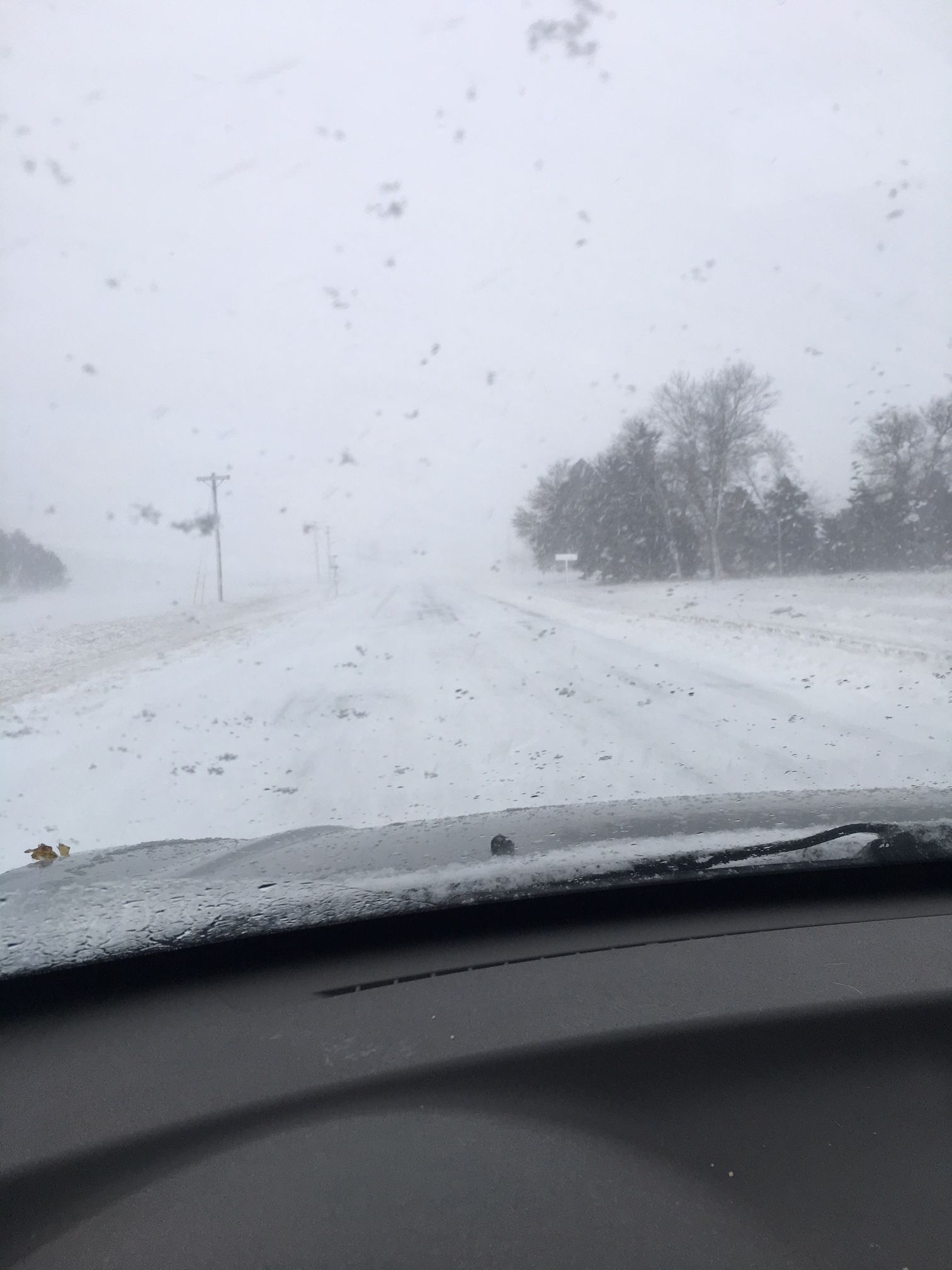 I’ll just start out by saying I often think the story “behind” the production can be more interesting. This is one of those tales.
With a new week starting last Monday, I was up early to go pick up paper for a new project for a customer in LA. I drove right by a rainbow on the way and sensed it was a good sign. 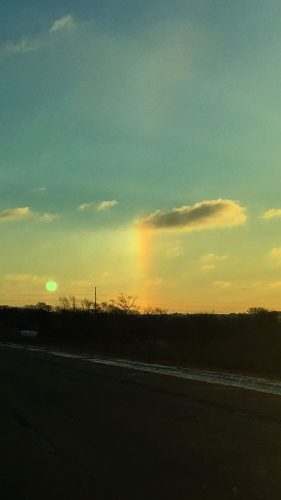 My friend Bryan, mentioned it was called a Sun Dog. Not being superstitious or anything, I considered it plain ole’ good luck and it was. I closed 2 new orders that day with a 3rd and 4th in the works.

So as the week quickly progressed, I had a new client in Los Angeles, and another in Chicago. The cloth for the LA project was ordered, and I foil stamped all weekend and went to bed late Sunday night. Monday morning I got up at 5:00 and hopped in my car to drive north to Norfolk where I was going to finish the binding. I didn’t even stop to look at the weather report, as it was warm and just drizzly in Lincoln. As I drove West out of Lincoln, I soon realized, perhaps I should have worn a heavier coat, or brought a hat and gloves. It went from light drizzle to snow conditions real quick.

I had driven this exact road north many times over the last 5 years or so. I always enjoyed the scenic and beautiful sunrises I’d encounter on the back roads, usually somewhere around Shelby like this: 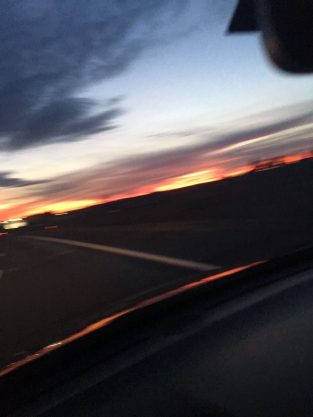 I have even driven through many a heavy snow packed morning to get the books delivered or picked up. But this day, as I approached Shelby, I could not go any further. Pure white out! 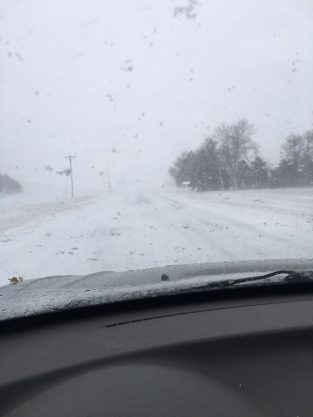 I had to stop in the road and texted Max up in Norfolk. He answered back right away:
“No, it’s bad, bad, don’t come….”

Sheepishly I turned around and slow rolled all the way back to Lincoln. It was eerie. I was almost the only car on I 80 coming back into Lincoln. It had really gotten bad fast!I sent an email to the LA client and she was very pleasantly understanding about the weather problem. ( sigh…relief). I told her we’d be back on the job tomorrow.
I planned to go back up the next day which was Tuesday morning and I set out again early to head north. Roads were cleared off and it had stopped snowing. I got all the way to the “S” curve before Shelby and was rounding the final loop, when I encountered several semi trucks stopped because the road was blocked with a deep snow drift. A truck driver in a neon vest came over and chatted with me for a moment.

“Those guys on the other side of the drift, they have been waiting 3 hours….” He was saying as my mind raced and eyes scanned the surroundings. Here I’m thinking to myself, ‘I am already a day late to my customer in LA, I can’t lose another day! They won’t understand this!! ‘ Off to my right, up on the hill, there was a cemetery, but there was also a slightly snow covered dirt trail. So I pulled up the map on my phone and determined if I was lucky, as in REAL LUCKY, I might be able to shoot down that dirt road and get around this snow drift and back on the road to Norfolk.

I said my goodbyes to the nice truck driver and told him I was going to pull over to that dirt trail and check my map. I gunned it through a small snow drift, kept going up over the hill and found open dirt road. And I kept going. Rolling hills and dirt road for about 3 miles. I was moving! I only had one other snow drift to contend with which was a bit scary as it was in the middle of an incline. I backed up to accelerate through it, but I could not see if anyone else was coming from the other direction as I crested the hill. Whew this was exciting and I was sure I was living life to it’s fullest. All I could say was Holy Cow!, or something like that… 🙂

The rest of the journey was a bit white knuckly, slippery and snow packed, but all good. I made it in to Norfolk, we worked 2 days solid on the new project and got samples shipped out to LA Fed Ex. Production of the job was another set of problems which we attacked and handled with vigor. With a few modifications, I had another successful project under our belt.

The moral of the story?
I could have posted pictures of the fancy books we created deploying innovative techniques for foil stamping, duplexing cloth to paper, and PUR binding, and so on. But I personally think it’s sometimes more interesting to know some of the details that go on behind the scenes of certain projects that most people never hear about. That’s just me. Life isn’t always a bowl full of cherries. The battle wounds always have more interesting stories than the trophies.

So that’s the story of the Blizzard of ’18. Hope you have enjoyed this true tale and if I can help you with project consulting and production for your next journal, stationery, gift, art or photobook projects, I would love to hear from you! I’ll go that extra mile for you!

← Collaboration Over Competition
Poetry Train and a Dos a Dos →